The Role of Sons in Optimising Men’s Health 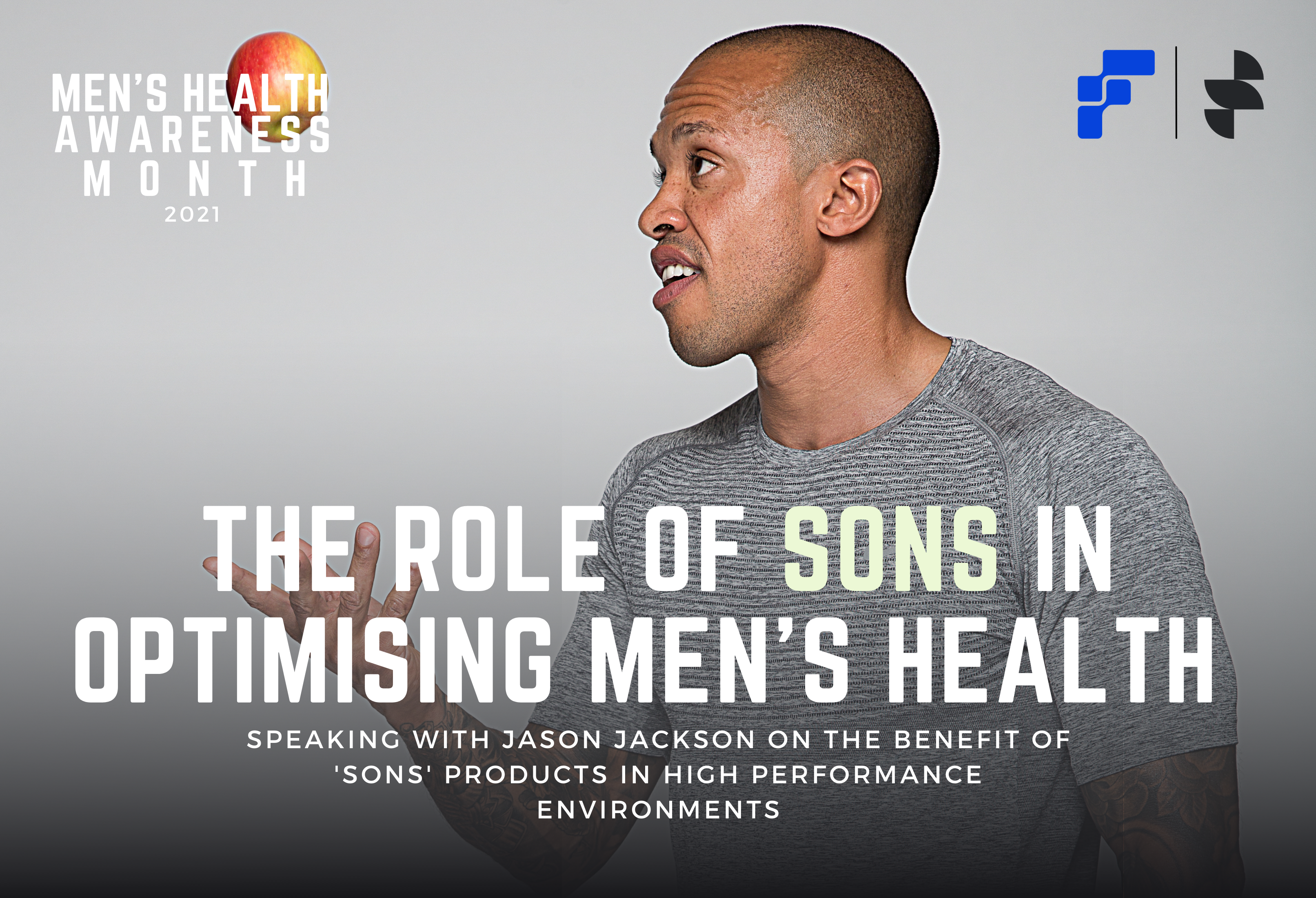 To finish our series for Men’s Health Awareness Month, we spoke with Jason Jackson MSc, a scientific advisor for Sons; a men’s health and well-being company.

Sons is a men’s health and well-being company aiming “to make every new generation of sons healthier and happier than the last.” Sons develop and sell treatments for men’s hair loss, gut health, brain health, and immune health.

Jackson is a sports nutritionist at the Millwall Football Club in southeast London, an advisory board member at a well-being company ‘LVL’ based out of Dubai, and he is a scientific advisor at Sons where he works on fine tuning some of the existing formulas and developing new products. He is an accredited strength and conditioning coach as well as having been a personal trainer for the past 14 years. His educational background includes obtaining a Masters of Science in sport and exercise nutrition and conducting research into the effects of training, nutrition, and recovery on testosterone.

“it’s a fantastic opportunity – probably the most exciting project I’m currently working on. I get to put all my academic knowledge into practice and at the end of the research we’ll have an actual product that will be the result of that.” – Jackson on his position with Sons

In our current day and age, as Jackson acknowledged during this interview, more attention is being paid to health and well-being. This can partially be attributed to Covid-19, but also the recognition of the need to take care of oneself due to the unprecedented circumstances we have found ourselves in. These are inclusive of working from home, and lack of movement or exposure to other people, amongst other things. Therefore, the topic of health and specifically men’s health – to finish off Men’s Health Awareness Month, is especially important.

So how can Sons impact and improve men’s health in athletics?

Commonly, various supplements are taken by athletes in order to manage deficiencies they might have of certain vitamins and minerals. In general, taking supplements can be a simple yet effective way for athletes to improve their performance. However, these supplements should be just that – supplemental. Ultimately, they are most effective when paired with a balanced diet. Jackson discussed that his main recommendation is a “food first approach” and “eating the rainbow,” discouraging a synthetic diet of just these supplements. But while getting nutrients from foods is the priority, he mentioned that “certain vitamins and minerals are harder to come by – vitamin D is impossible to get enough in from our food. So, think of food first then consider what vitamins and minerals you may have insufficient amounts in.”

Jackson explains that the athletes that he works with on a daily basis are within a healthy threshold but are looking to go beyond that and push themselves into being in an optimal level of health. These are people who are already at an average healthy level but want to ultimately “perform at their best,” implying that taking supplements to minimise deficiencies may help them achieve this result.

Sons has developed an immune health product that helps to strengthen someone’s immune system and make them less susceptible to sickness. Jackson mentioned this product is a good barrier against infections but also can be a benefit in other ways as well.

Jackson is a huge advocate for the positive effect of including a vitamin D supplement in someone’s regiment and explained the positive impact it can have to someone’s health. This particular vitamin can be found as one of the ingredients in this immune product.

“One of the challenges I face is making sure that the lads can play as often as possible and aren’t taken out with respiratory infections – these guys are more susceptible to them than the average person because of their high training loads, training outdoors and training in the rain in cold environments. So, it makes sense to support their immune function with products like the Immune Health range.”

The gut health product by Sons helps to “treat digestive troubles and improve the general condition and health of the gut.” When relating the impact it can have to the athletic lifestyle, Jackson acknowledged that it could help in “making sure that athletes have the right bacteria in their gut when they have to consume large amounts of carbohydrates to store glycogen in the muscle.” He wants to make sure athletes can tolerate the types of foods they need to consume in order to maintain an optimal level of athletic performance.

The perspective Jackson has towards the development of supplements for Sons is picking ingredients that people are most likely to be deficient in and then having them in the right does. While there may be a list of potential ingredients that might be beneficial to include in a product, he says it is about “selecting the most effective ingredients at the right doses and really championing those”. While Sons may have a list of ingredients that would be beneficial to include, Jackson researches dosage amounts in various literature, understands the deficiencies in different populations, and then finds a combination that will have the most benefit to the most amount of people.

Sons has kindly provided us with discount codes for you! Use the following to get a great deal on your first order of some great products:

Visit https://Sons.ie to view all products and learn more about the company!